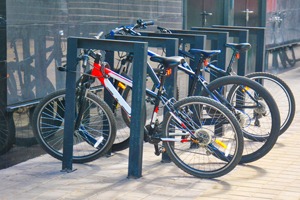 A bill recently filed in the North Carolina House of Representatives would require cyclists to register bicycles for use on public roads. A news article outlining the reasoning behind, and opposition to, this pending legislation is available here.

The bill—introduced by State Representative Jeffrey Elmore of Wilkes County—would require all cyclists aged 16 or older to pay a $10 fee each year to register their bicycles for use on local roads and public highways.

Currently, nothing in the bill specifically addresses how the proposed law would apply to the large number of out-of-state cyclists who visit North Carolina every year to ride our mountain trails or engage in competitive cycling events.

While some local residents indicate the bill is not a significant concern, others suggest it is a potential overreach of authority. Supporters acknowledge the bill as the beginning of a move to help fund transportation infrastructure and related initiatives. They also remember having to register their bicycles when they were children—and do not see any potential threat in the legislation.

Calling the bill a “slippery slope,” some opponents have suggested the state could move toward taxing wheelchairs or even pedestrian traffic in the future. Some who voice opposition to the bill claim cyclists should actually be subsidized rather than penalized for helping remove cars from crowded roads.

Others opposed to the legislation suggest many cyclists ride our public roads because they are unable to afford an automobile—and object to any measures they feel could make it more difficult for those riders to save toward the purchase of one.

We’ll See You On the Road.